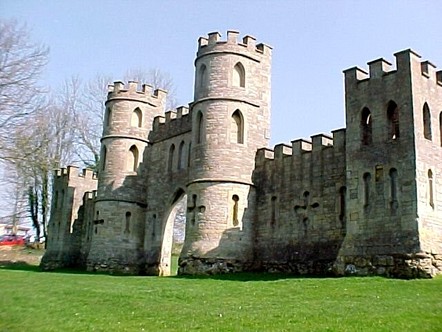 Reprinted with the kind permission of The Antiquer, February 2004.
Copyright © 2004. All rights reserved.


Romanticism is most closely associated with an artistic, philosophical, religious, and political movement of the late eighteenth century and the first half of the nineteenth. As much as it was a movement, it was also, perhaps more specifically, an attitude or intellectual orientation that may be viewed as a rejection of the formal orthodoxy – the order, harmony, balance, and idealization – typical of Classicism, particularly eighteenth century Neoclassicism. Romanticism was powered, to some extent, by reaction against the Enlightenment and eighteenth century rationalism – it was not a “romance” of the heart as much as it was a “romance” of the mind. Characteristics of the Romantic attitude included a deeper respect for nature, enthusiasm for the uncivilized, ennobling the primitive, heightened perception and examination of human personality, and preoccupation with exceptional persons. Emphasis was also placed on interest in the past and elevation of the creative spirit over adherence to formal rules and procedures. Romanticism praised the imagination as a means of entry into the realm of spiritual truth and transcendent experience. During the Romantic Movement interest spread to folk culture and national and ethnic origins, to the exotic and mysterious, and to the occult.

The term Romanticism ultimately derives from the Romances written during the Middle Ages, including tales of Arthurian legend. In England, the term Romantick was widely used during the eighteenth century to describe the dramatic and magical. Like Gothick, it was largely inspired by a romantic sensibility associated with the medieval period. Maturity of the Romantic Movement corresponded to the fast-paced and dynamic social transformation wrought by the French Revolution, the Napoleonic era, and the ruthless change and displacement brought about by industrialization. The Movement was brokered, in part, by a rapidly developing market economy, a shift from agrarian roots to industry-driven society, increasing urbanization, and the people’s need to maintain a connection to their pre-Industrial traditions – the mythos of a vanishing way of life.

In Germany, Romanticism found expression in literature and other arts modalities, notably in renewed interest in the works of Shakespeare and the “Storm and Stress” (Sturm und Drang) Movement in German drama associated with the works of Schiller and the early works of Goethe. Romanticism first took literary form in Britain in the works of poets like William Wordsworth and Samuel Taylor Coleridge, who were immersed in the Utopian social thought that followed the French Revolution. Poet and painter William Blake was the greatest proponent of the early Romantic sensibility in Britain, along with painters J.M.W. Turner and John Constable. Lord Byron, Percy Bysshe Shelley, Mary Shelley, and John Keats exemplified later Romanticism in British literature. In France, Romanticism was most closely associated with the paintings of Gericault and Delacroix, the plays of Victor Hugo, the musical compositions of Berlioz, and the novels of Stendahl. In Tsarist Russia, the chief advocate of Romanticism was Alexander Pushkin. While Romanticism spread through Europe, it was not strongly felt on this side of the Atlantic until later in the nineteenth century when writers like Bryant, Lowell, Thoreau, Whittier, Hawthorne, and Melville heralded the great romantic period in American literature. During the Romantic Movement, literature in general saw an exodus away from the nonfiction of the Enlightenment as tastes turned to fiction and poetry.

British Romanticism is a reference point that defines the period. By the beginning of the Victorian Era in Britain, “romantic” sensibilities were firmly entrenched in the English psyche. They made strange bedfellows with Britain’s transformation during the Industrial Revolution and insisted upon a broad exaltation of emotion over reason. In the face of immutable industrialization, Romanticism venerated human feeling. The aesthetic “gospel” of validating subjective experience was as much a reaction to the cold formulas of Neoclassicism as it was to the cold reality of the dawning industrial age.

At a time when vast numbers of British people left the countryside to seek employment in newly industrialized cities, rural life became an ideal, a place of inherent beauty and a source of wisdom. This was powerfully expressed by William Wordsworth: “One impulse from a vernal wood / May teach you more of man, / Of moral evil and of good / Than all the sages can.” Men like Johnson in the eighteenth century and Ruskin in the nineteenth buttressed an emotional or sentimentalist school of ethical thought that initially grew in response to British empiricists like Thomas Hobbes and John Locke. Imagination was a pivotal force in the movement’s development and welcomed emotion as a proper subject and object for art. Overall, confidence in intuition and instinct that exceeded the boundaries of reason was pushed to the fore. Heroes (real and fictional) were lionized, and their heroic deeds were seen as acts of intense emotion. The natural world was incorporated into human nature and viewed as a vehicle for expressing feelings. The basic tenets of the Romantic Movement also brought greater attention to women and to the “estate” of childhood – despite the fact that the lives of most poor women and children were dominated by arduous labor, illiteracy, and appalling privation. In addition, a predilection for the remote and the obscure permeated all sectors of society, culture, and taste. The particular standards of British Romanticism, like the emotions they canonized, were not rigid, and various interpretations were manifested; thus, contradictory aspects of the Movement existed. Most importantly, Romanticism embodied a belief in introspection and a belief in the importance of the individual.

For the Victorians, the Romantic spirit was reflected in the artistic and intellectual pursuits of emotion, imagination, and freedom from social propriety in art forms. As industrialization spread, labor economics began to change in Britain. The poor remained poor and did without material comforts; but the upwardly mobile middle classes, driven by higher social aspirations and affectations, surrounded themselves with a huge assortment of practical, decorative, and intellectual accoutrements that, if nothing else, presented an illusion of prosperity and learnedness. Art, literature, and music became increasingly accessible and reflected a romantic disposition. Advancements in printing techniques brought great works of art in the form of lithographs to an ever-widening public; magazines, newspapers, and books (that ranged from popular fiction and poetry to the Bible) were printed and purchased in quantity; and well-attended theatrical events took on romantic intensity.

The romantic perceptions of the era were keenly felt in Staffordshire where the celebrated potters triumphed through the transition from a local cottage trade to a lucrative and world-renowned industry. In potworks throughout North Staffordshire, huge quantities of transfer printed tablewares were produced in an endless array of romantic patterns. One of the first was Spode’s Blue Willow pattern, which was introduced as part of the effort to manufacture durable, white-bodied wares that could successfully compete with blue and white Chinese export porcelains. Willow tablewares offered a domestically produced and more affordable alternative to imports and depicted the romantic and star-crossed tale of a mandarin’s daughter and her commoner lover. The merging of commerce and romance was a winner: various other romantic transfer patterns followed and were printed in light blue, green, red, pink, black, flow blue, and mulberry. Many transfer patterns depicted romanticized landscapes, portrayals of places and events enhanced by sentimental devices, scenes from literature, moments of human experience, and nostalgic subjects. Most took the romantic view of looking back longingly to the pre-Industrial age. Such pattern designs produced predictable responses in purchasers whose elaborate dinner parties and dining services endorsed the romantic sensibility. Staffordshire’s potters also produced hundreds of thousands of earthenware figures and groups, which, when set on mantelpieces, polished the romantic veneer of their era. Figure subjects included, among others, heroes and heroines, persons from the Bible, religious leaders, bucolic country themes, depictions of blissful childhood, and assorted representations of courtship.

Medieval myth and Victorian Romanticism made perfect bedfellows and were widely intertwined in contemporary literature and art. As the Gothic Revival took hold, it generated interest in a range of romantic ingredients that were conveyed in paintings by such artists as Lord Frederick Leighton and John William Waterhouse. Later in the Movement, Pre-Raphaelite progenitor, painter and poet, Dante Gabriel Rossetti embraced the romantic vision and espoused with his intimate circle an anti-Academy credo that was a composite of passion for the pure art created before Raphael (1483-1520) and the “romantic” precept of an artist’s individuality and freedom of expression.

Architecture favored Tudor and Gothic design, and whimsical details like turrets, gingerbread trim, gables, and corbels were added in abundance. Beginning late in the eighteenth century, picturesquely romantic follies were constructed by the wealthy. Vision-like, they were dreamy, magical structures often designed as Gothic ruins that defied the commonplace and served no practical purpose whatsoever: they decorated grand estates with romantic, although otherwise pointless, effect. Living spaces took on the substance, colors, and textures of dramatic and romantic décor: ornate furniture, shawl-draped tables, idyllic paintings, framed needlework, and bric-a-brac of every conceivable size and form. The Romantic Era, with its affinity for both nature and the mysterious, produced several symbolic “languages,” notably a detailed lexicon of flower meanings. Accordingly, flowers figured strongly in much Victorian design. Romantic floral patterns were used extensively in textiles; flowered wallpapers were complemented by large arrangements of cut and dried blooms; and flowers (as well as various small taxidermied animals and birds) were often displayed within glass domes. Even the ephemera of the era (music fronts, calling cards, scraps, and scrapbooks) were decorated with romantic motifs.

During the Romantic Movement, as social reform gained impetus, so did religious fervor – conformist and nonconformist alike. The “romance” of religion was articulated through concentrated emphasis on scriptural texts and devotional literature, Biblical personalities, questions of morality and salvation, and eloquent preachers of every denomination. The Argus eye of Victorian vision focused on the same spiritual concerns that directed medieval sensibilities away from the Classical ideals of ancient Athens: divine perfection and human frailty, good and evil, and life and death.

Although the Era is remembered for high ornamentation that suggests enthusiasm for life, death played a significant role in informing Victorian experience. Three of every twenty babies died before their first birthdays, and the average life expectancy for those who survived infancy was forty-two years. Such staggeringly high mortality rates resulted in a preoccupation with death that took on a “romantic” persona. The dubious “romance” of life’s transience was widely evident in literature, art, and contemporary drama. The translation to everyday life resulted in elaborate mourning etiquette, required mourning attire (black crepe garments, widows’ mantles and caps, veiled bonnets, black armbands, and black gloves), “romantic” mourning jewelry that contained locks of hair from the deceased, black-banded calling cards, post-mortem photographs of the deceased, and interest in spiritualists, mediums, and séances.

Although Britain’s industrial metamorphosis brought greater privileges to the elite and hope for a better future to the rising middle class, it also brought ruthless dislocation, devastating poverty, the cruelties of workhouses and poorhouses, virtual slave labor, and abject misery to much of the sceptered isle’s population. The Romantic attitude was, metaphorically, a protective veil that covered unpleasant realities. It also provided a buffer between the thrust into a new and unpredictable way of life and a yearning for the simpler times of the past. In many ways, Romanticism was a trait of the effusively emotional and often mawkishly sentimental Victorian personality. Most importantly, as transformation rocked the nineteenth century, the Romantic Movement provided a supreme means of escape: escape from pervasive mechanization, escape from the sharp contrasts between wealth and poverty throughout Britain, escape from the social disparities that separated Britain’s people, and escape from widespread economies with the truth that characterized the era. For those who lived it, the Romantic Movement was an emotional balm that they applied against the irrevocable evolution of a world that was changing more quickly and more completely than they could rationally understand.